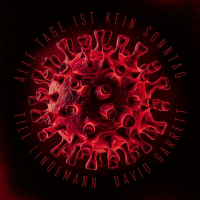 Till Lindemann and violinist David Garrett will release on December 11, 2020, a cover of Alle Tage ist kein Sonntag (All days are not Syndays). The original song is from 1922 and was written by Carl Ferdinands and Carl Clewing.

The single will be released in three formats: digital, CD digipack and red 7 inch vinyl. Zoran Bihać filmed the video for the song.

The project is not linked to Lindemann. Till has announced it with its own accounts on social networks.