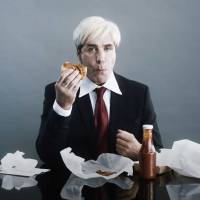 Till Lindemann shot an advertisement for LikeMeat, where he eats one of the brand's plant hamburgers.

In the making of the film, Till had creative freedom to bring in his own artistic approaches. His food performance is inspired by the legendary art film Andy Warhol eating a Hamburger by Jørgen Leth from 1982, in which the world-famous pop artist can be seen eating a classic hamburger.

The music for the last part of the video was composed by Sky Van Hoff, who has already worked for Emigrate and Rammstein.